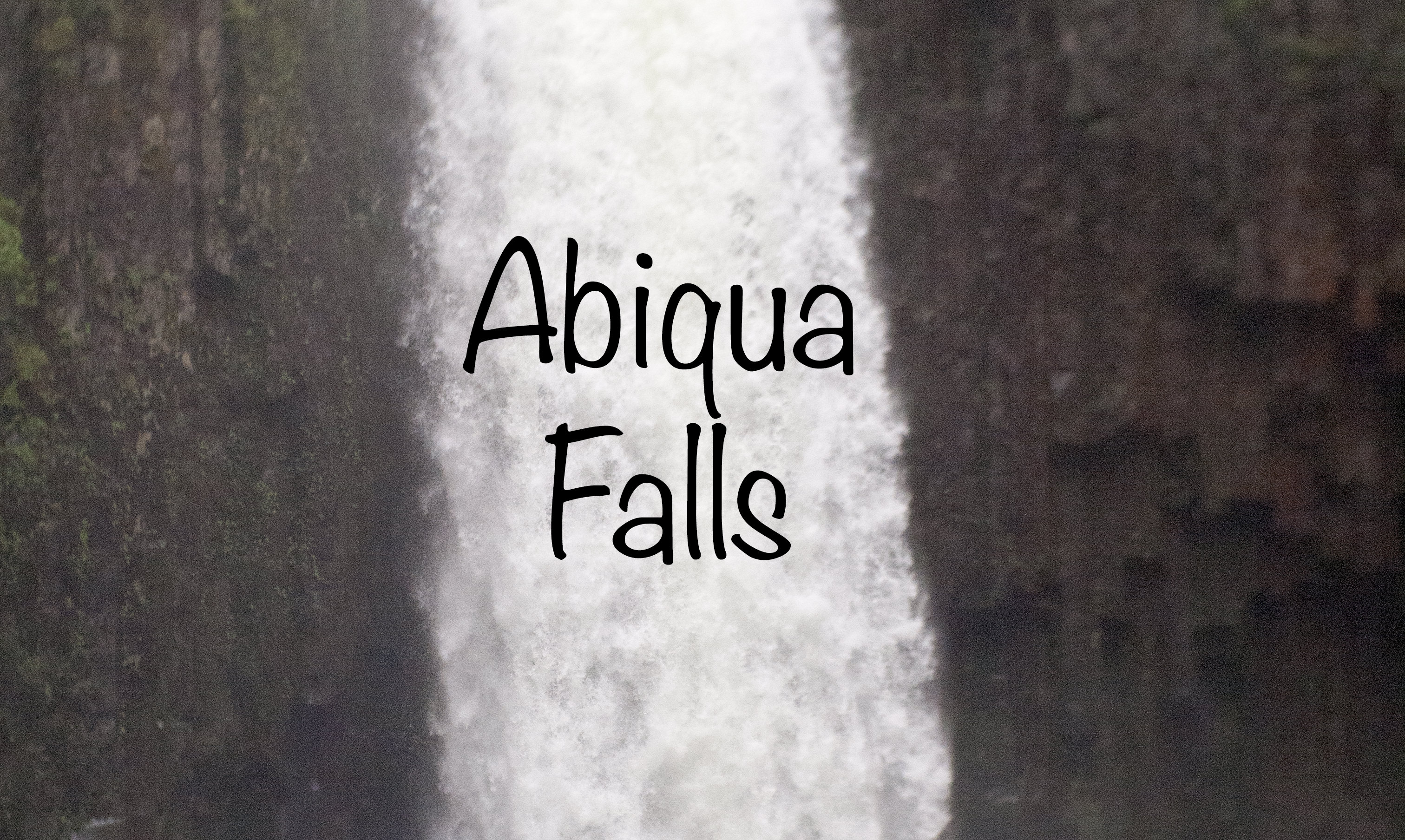 This wasn’t the hike I had chosen to take. My sights were set on a different trail an hour’s drive in a different direction. Still, some guiding force led me toward this hike. All the while, a voice in my head would contradict that guiding force. It was up to me to decide which to listen to. The voice saying “turn back” or the vague sense of magnetism pulling me forward. This was my trip to Abiqua Falls, Oregon.

I had a morning of free time during a trip to Portland. My wife was there for work, and I joined her because we love it up there. My plan was to see how epic of an adventure I could squeeze into the few hours between dropping my wife off at work and meeting an old friend for lunch. Eagle Creek trail appeared to be the biggest bang for my buck**. Multiple miles to hike, multiple waterfalls to see. It’s located along the beautiful Columbia River gorge and the trail’s falls feed the river that flows to the Pacific. My backup was Abiqua Falls, which was an “hour” to the south near Salem. It was my second choice because the hike looked to be a short walk from the parking spot and it was just one waterfall. Not really much thrill in exchange for the drive, but I could at least see a big waterfall and get a picture. After dropping my wife off for work I sat in our rental SUV looking at the logjam of traffic heading north into Portland. My decision on which trail to hit was hurried by the intervals of the wiper blades pushing aside the light morning rain. Eagle Creek was an hour beyond that traffic. The road toward Salem on the other hand was an open, clear, path. So I took it.

The rainy morning retreated by the time I hit the back roads. Low hanging mist scraped the crevices of the Cascade foothills that served as the backdrop of the numerous Christmas tree, sheep, and alpaca farms I passed. This is where Rockwell’s version of Christmas is made. After over an hour, the pavement turned to dirt, painted lines into potholes, farmland into logging country. This was when things got hairy. Since Abiqua was my backup, I hadn’t done enough research. Now on a logging road up in the foothills I found that nothing was clearly marked and there were multiple roads to turn off and head down. No cell signal to look up where I should go or if I was lost. All I had to go on was instinct and ¼ tank of gas. So for about 15 minutes I drove down this muddy, gravel, bumpy logging road. Eventually I found a sign. It was on a closed gate and said “No Trespassing”. Maybe my instinct wasn’t guiding me and I should’ve listened to that voice. I was less gentle with the potholes and puddles on the way back. Checking the clock and gauges, I knew only had enough time and gas to try out one road. If I were wrong, I’d have to go home empty handed. But I felt a tug toward a specific road entrance. There was a bulletin board with nothing was posted on it, but why would it be there unless something was down that road right? So I turned. 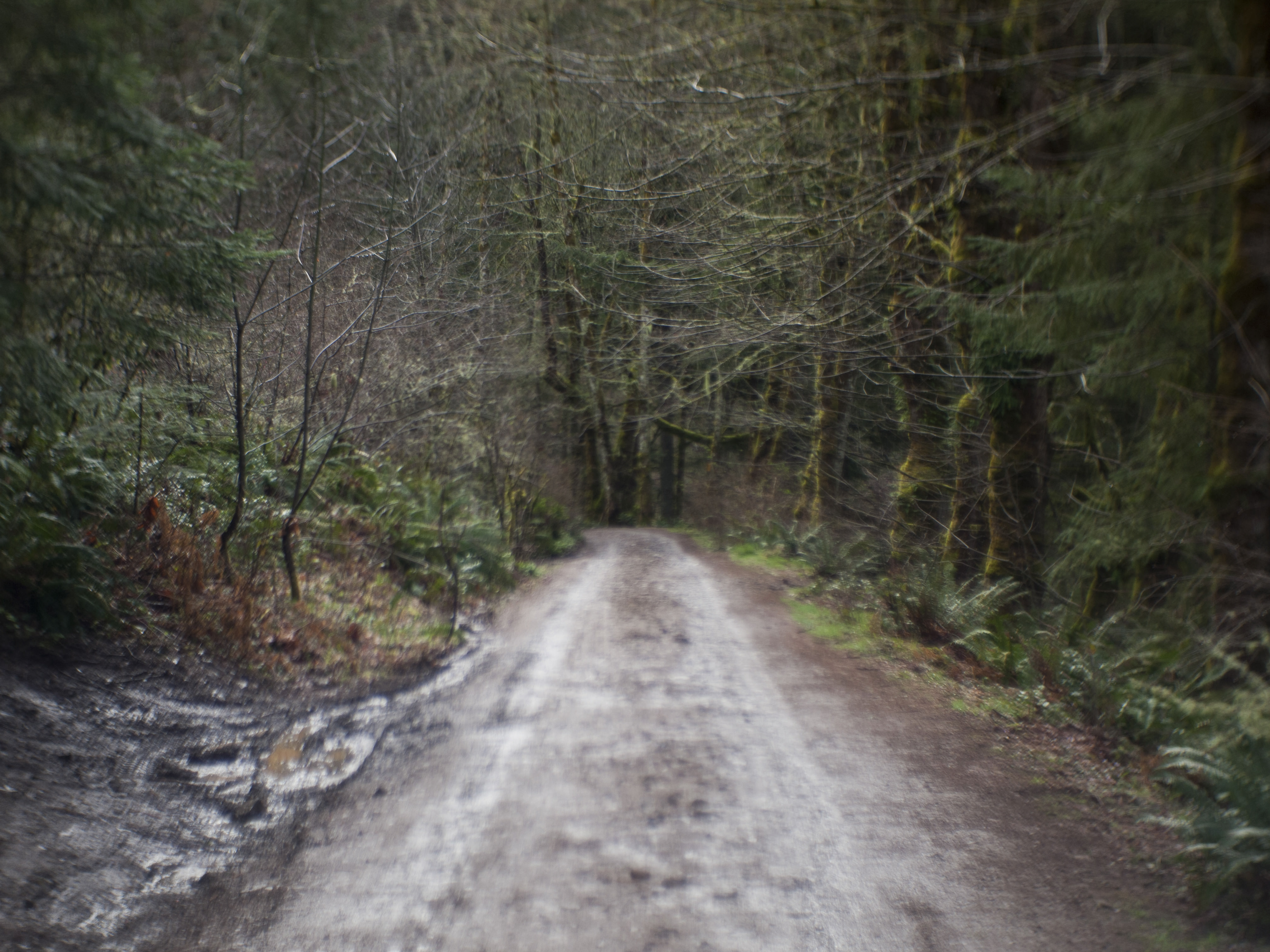 At first the dirt road narrowed. A bit further and the road’s ruts put the all-wheel drive to good use. I was pushing through puddles and feeling tires slip on mud and loose rock. The voice saying ‘turn back’ was getting louder. No popular waterfall with an easy hike would be down a road like this. How would so many people even get to it? Still, I’d come all this way, might as well see what’s at the end of this road provided I don’t get stuck or run out of gas. The road was closing in around the car. Braches and bushes scraping the sides. Around another slight turn and there was…another closed gate. This is when that voice in my head very loudly said “great, we gave it a shot but we really need to turn back.” I ignored that voice. The gate wasn’t marked “No Trespassing” but instead was mentioning recreational use. I pulled to the side, shut the engine off, got out, took in a deep breath of fresh, wet Cascade mountain air and just listened. I could hear it. The rush of a creek. I’d made it after all. 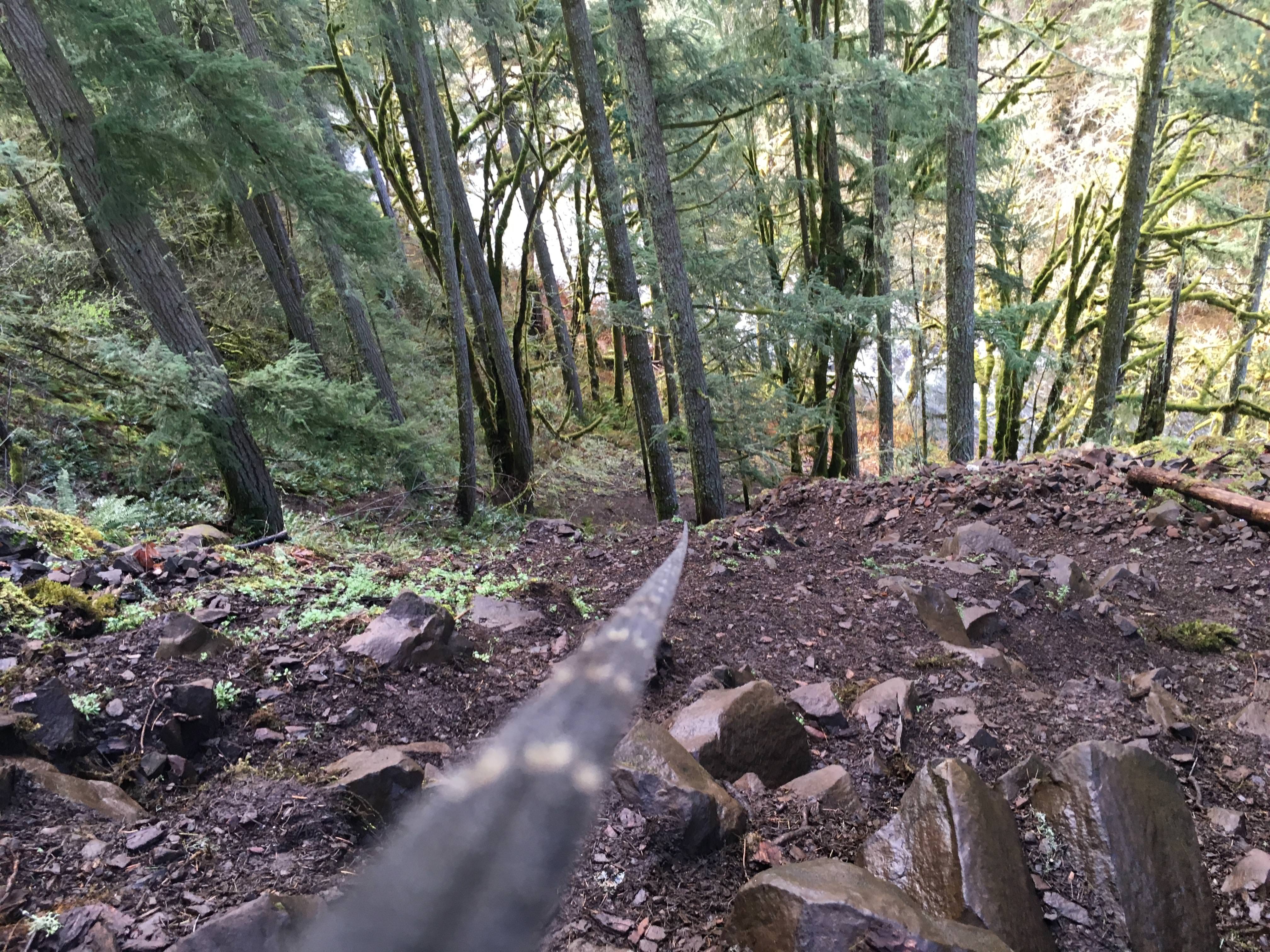 I strapped on my hiking shoes and headed toward the sound. A few strides down the trail the tunnel of trees opened up and gave me a view of a hilltop with a bald patch stripped bare by logging. Another few yards came to an overlook and peered through the tall pines practically straight down to the creek that would lead me to the falls. Getting down to that creek was the trick. It was a 70-foot drop. A muddy, rocky trail only safely navigable in wet situations like this with the climbing rope tied off atop the trail. “Well, you wanted adventure. Here it is.” So I grabbed the rope with confidence and backed down this wall in such a way that I felt like I should be yodeling. A couple of slips later I’d muddied up the khakis I’d worn for lunch but I didn’t care anymore. I was in the thick of it now and looking down a rocky trail following the creek. 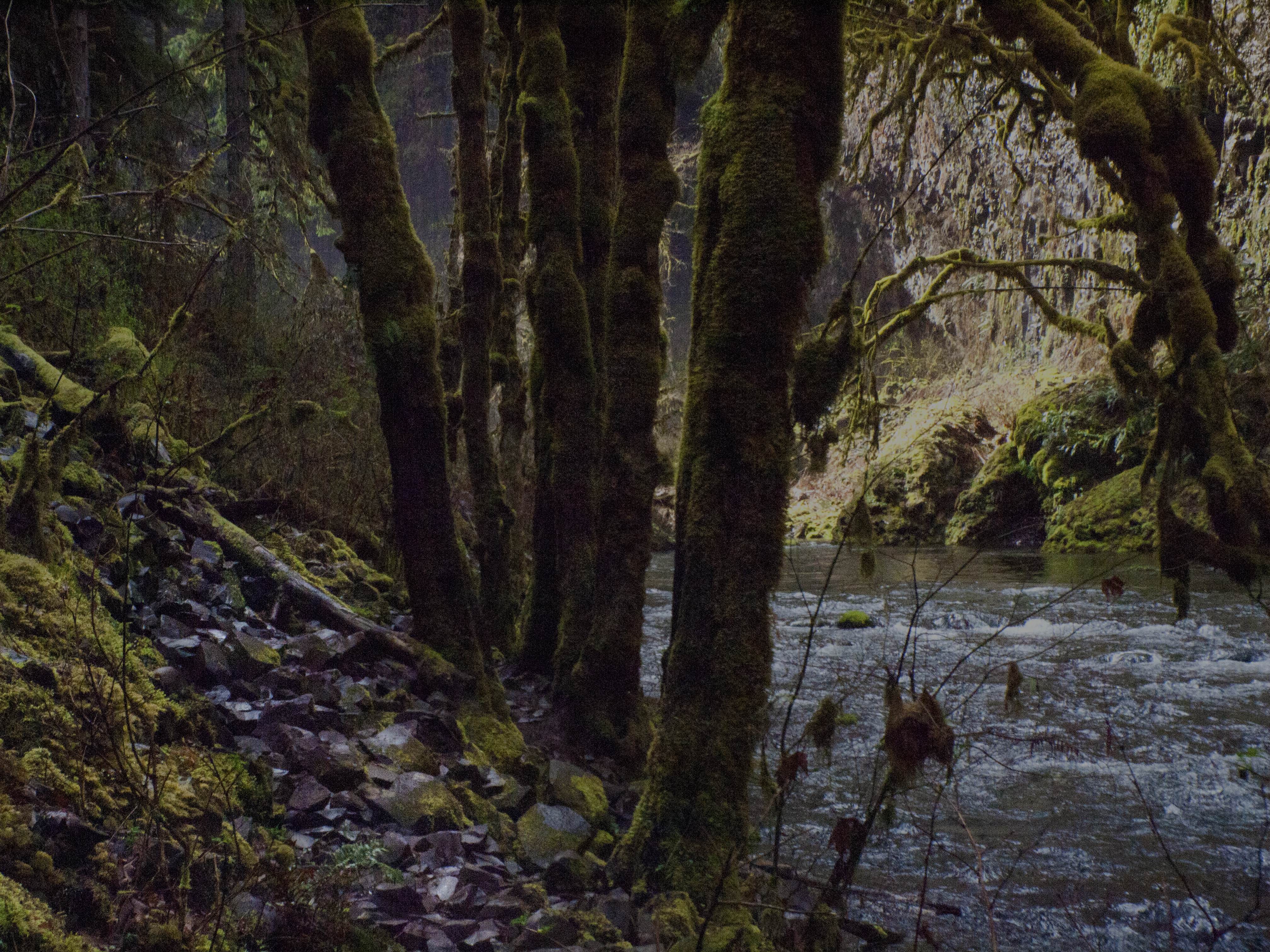 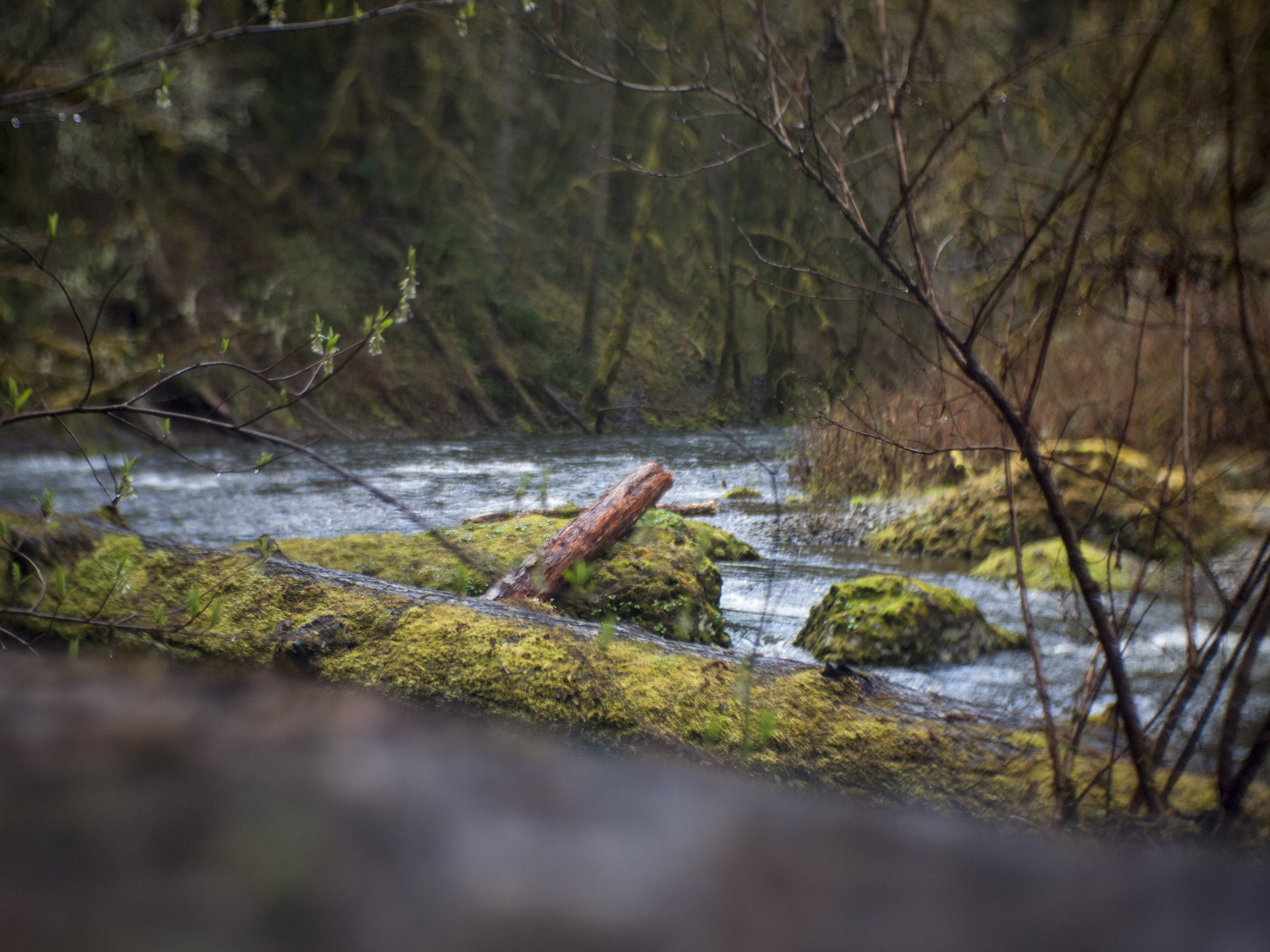 Beams of morning light had started to poke through the canopy. The wildlife was awake and active. Trees along the bank fully covered in moss. My ankle strength and balance were put to use going over loose rocks and crossing a felled tree acting as a log bridge. Up ahead was a bend in the creek where a tree sat in a spotlight as if it were a natural beacon. It was surrounded by a mist that was being blown in from around the corner. So again, I stopped and listened. I could hear the thunder. A hundred yards closer the falls grew louder. Without even seeing it, the power of the falls got my adrenaline running. It sounded like a landing passenger jet putting its reverse thrusters on full blast. Closer and closer to that shining beacon tree. The trail narrowed to slip in between the creek and a tall rock wall. Stepping around that wall is a spectacular reveal of Abiqua Falls. Standing 92 feet tall and flowing strong. The constant boom kicks you in the chest and the acoustics of the bowl of basalt fully encompasses you with the sound of nature in motion. 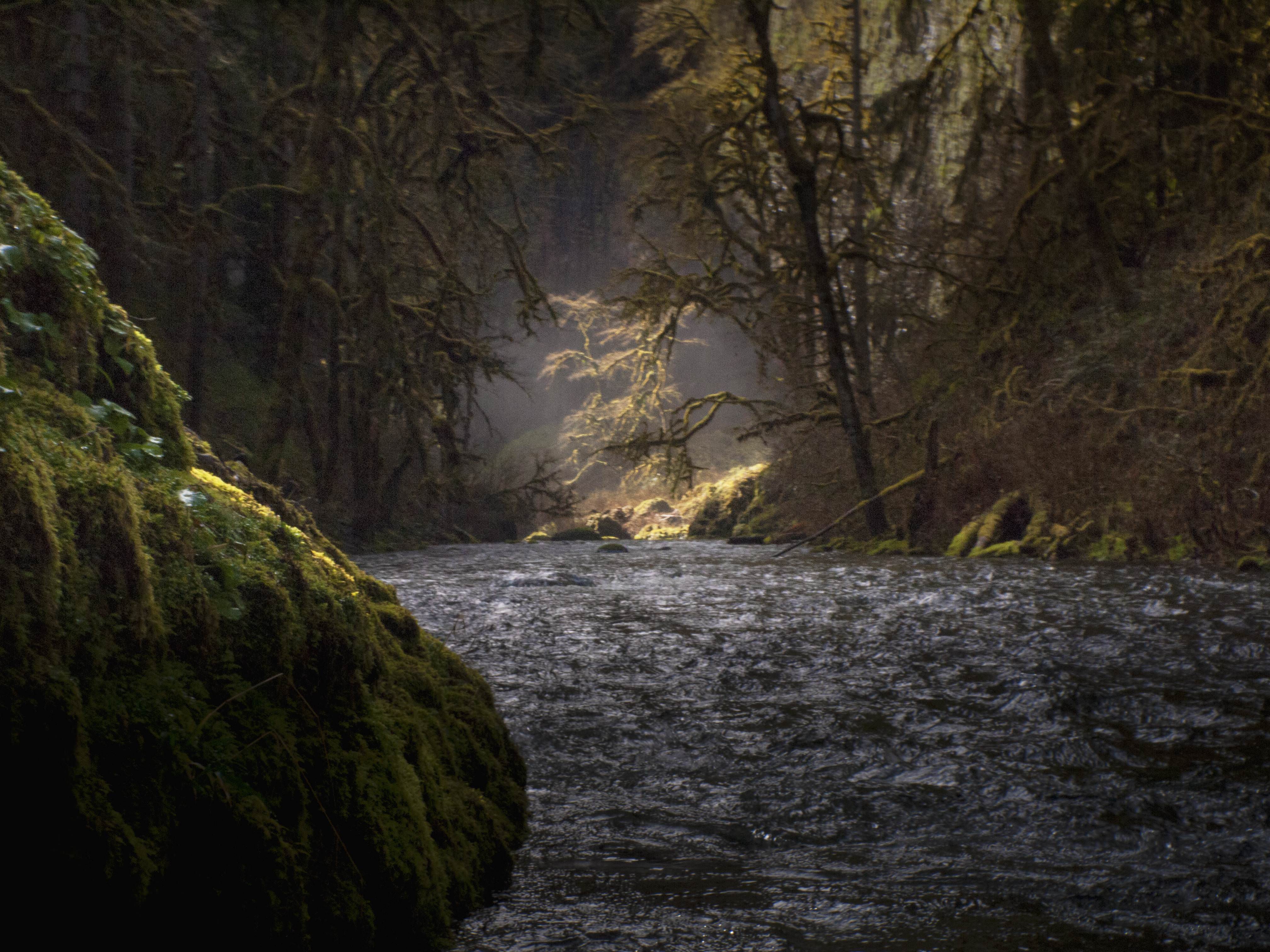 What’s special about this place goes beyond just the waterfall itself. It’s what surrounds you. Tall walls encircle you, and the tall pines atop those walls seem to loom over you. The colors from the sky, greens from trees and moss, reds from lichen, whites from crashing water, soft greenish blue water churning from under the falls. Mist hangs heavy in the air. Moss on the walls constantly drip clear water. Particularly eye-catching are the volcanic basalt pillars there to remind you how this waterfall was created in the first place. 17 million years ago this incredibly volatile volcanic region was still shaping and forming. Basalt lava is a different type of lava. It flows faster, and cools from the bottom up, middle out. As it does, the fractures form straight lines and hexagonal shapes that look far too symmetrical to be natural. 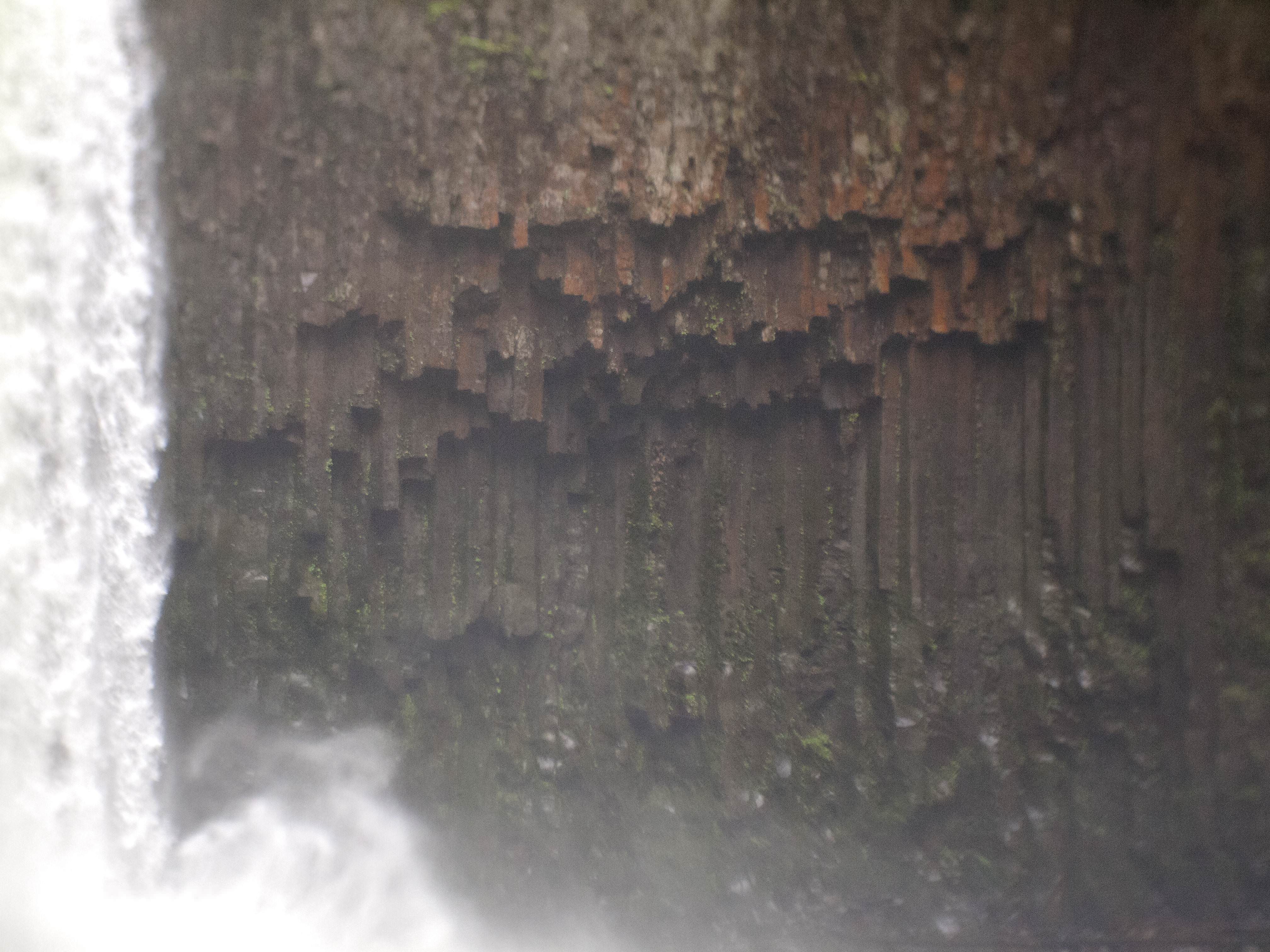 I had the place all to myself, and for the first time all morning, I eased my urge to rush. I walked the perimeter of the walls. Looking straight up the cliffs. Right up to the side of the falls to fully feel the force of 200 cubic feet of water per second falling 92 feet. Boy do you feel it. In the air and on the ground. 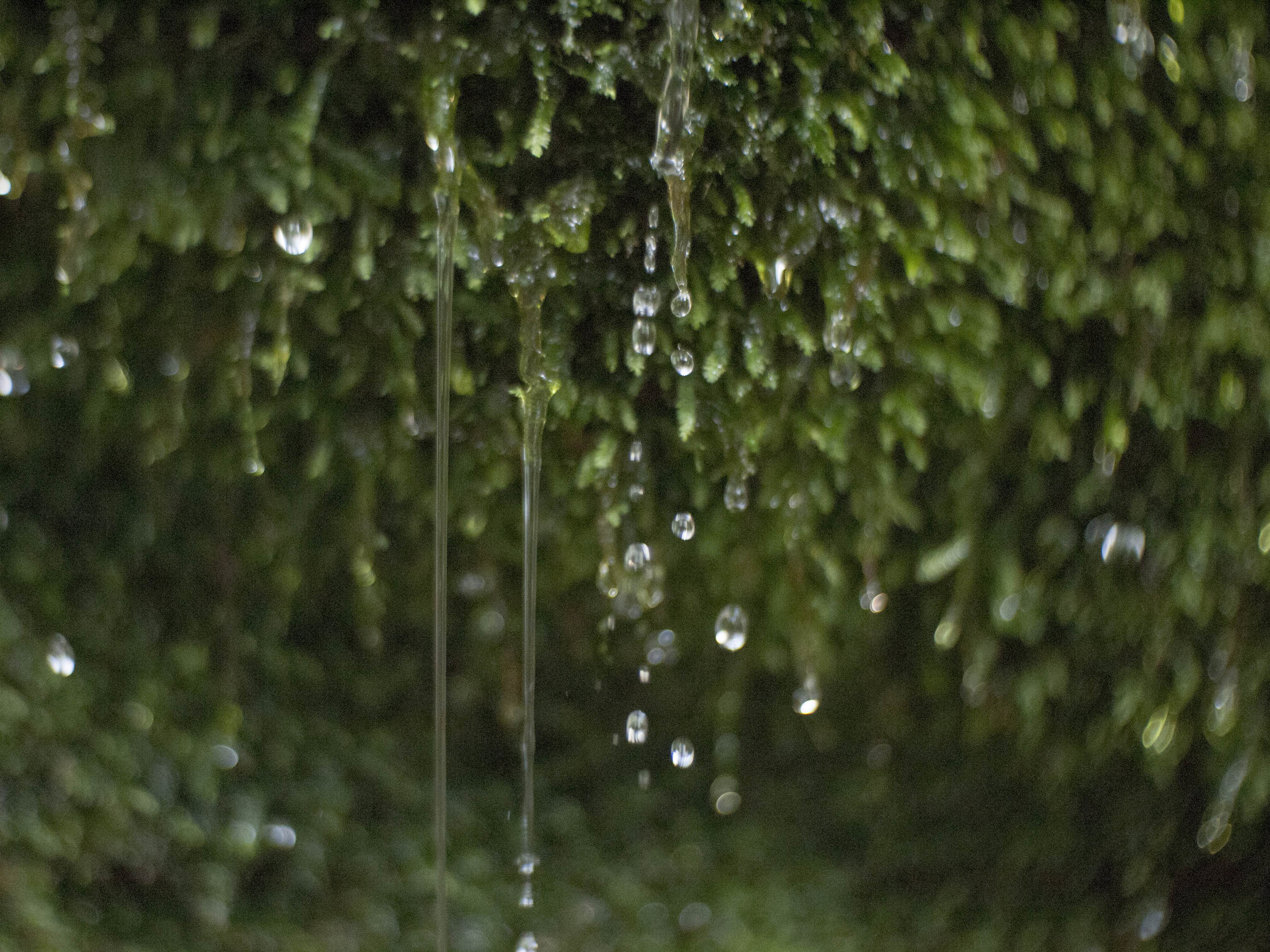 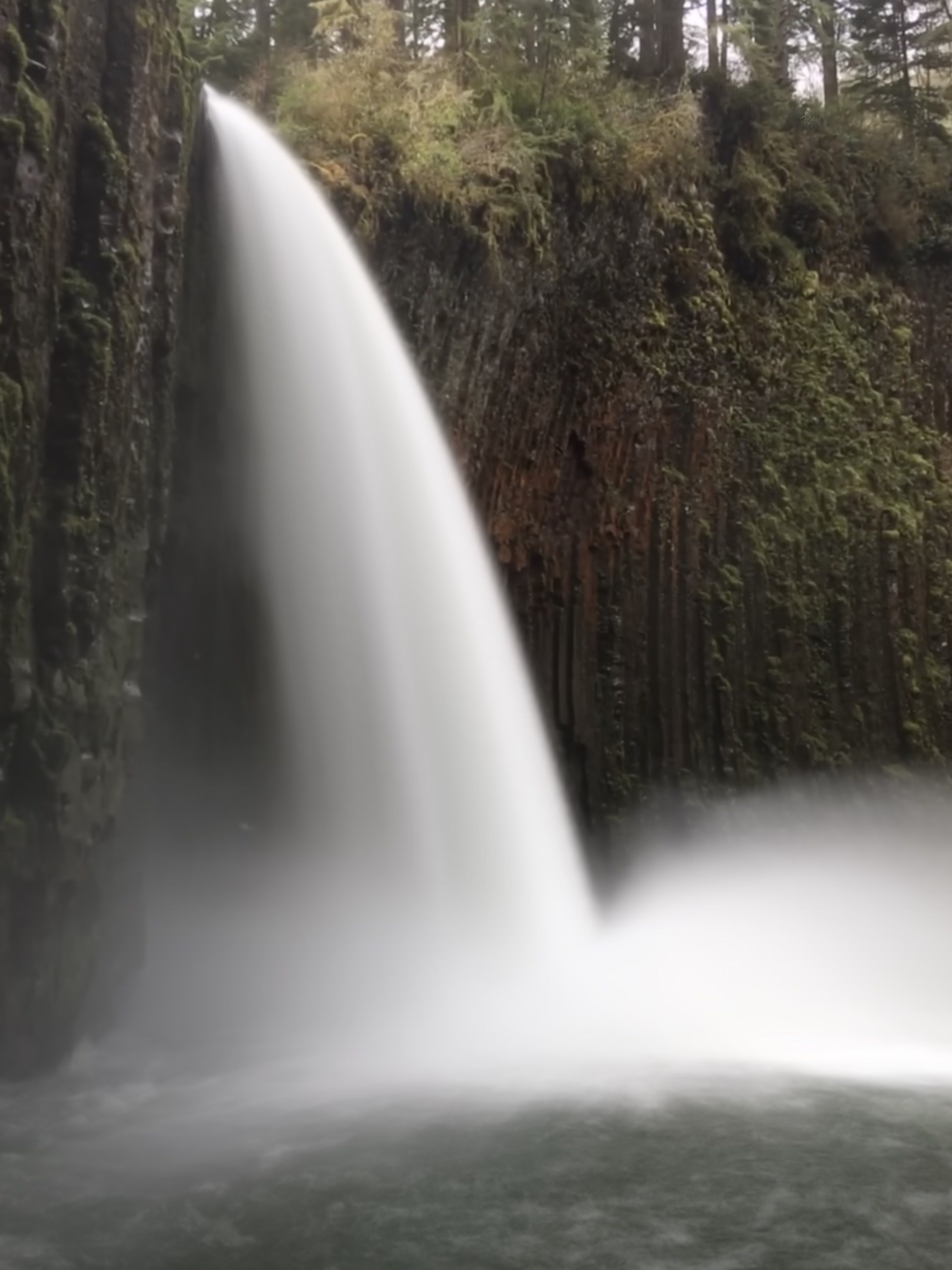 After taking in everything about this place that I could, it was time to head to the car. On the way out I took a trail that went up to a higher vantage point. From there I could see a smaller set of falls just up creek from the big drop. This higher, wider view was a good summary of perspective. I took a longer video just as a keep-sake and then headed toward the climbing rope that would take me out of the gorge. After about an eighth of a mile I heard that voice again saying, “turn back”. This time I actually listened to it. I went back to the falls and took a seat at the edge of a 40 foot overlook. I didn’t want to take pictures or videos. Didn’t want to take in the sights or listen to the sounds of birds and natural brown noise. I just wanted to exist right there in that place. Focusing only on taking in deep breaths accented by the mist from the falls. Not thinking about my next step, not thinking about where I need to be, not worrying about the rental car, or how much gas I have or how much time I have. I didn’t want to feel time slow down because I didn’t want to feel time at all. In all my planning for this trip and trying to choose an adventure, turns out this place and this moment is exactly where I’d wanted to be all along. I didn’t choose to come here. I was led here. Whether I’d made this my top choice or my last choice, whatever force that had steered me there was going to make sure I ended up there. So I just sat. Tried to look at nothing, to think about nothing, and to just absorb all that I could. 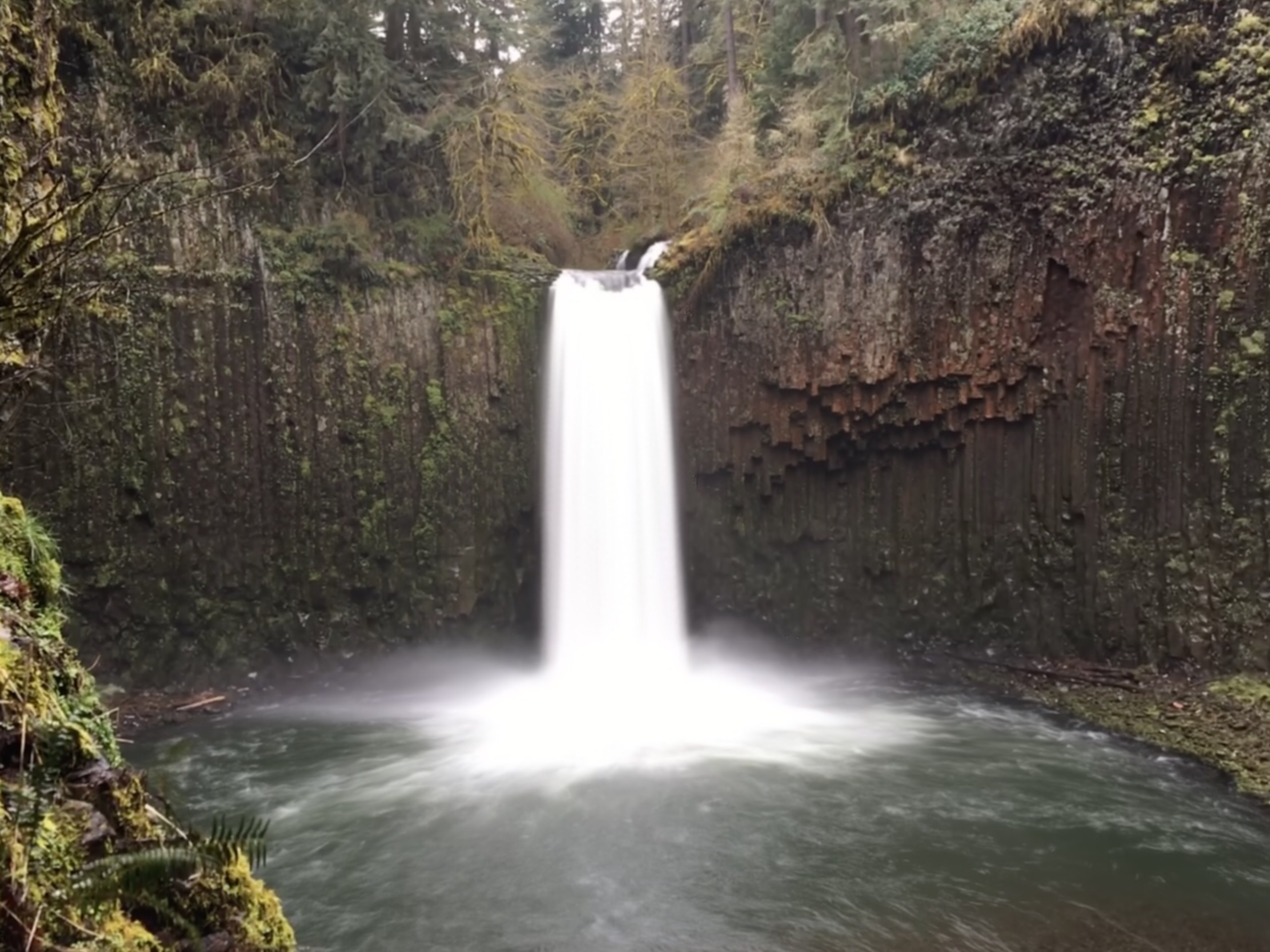 For real now, I needed to go back. At this point I’d worked up an appetite so that lunch date was sounding pretty good. Low rain clouds crept in through the trees while I was pulling myself up the rope as if to close the curtain on one hell of a show. My rental SUV slowly made its way back up the steep and narrow dirt road. Occasionally bottoming out and slipping. This time around I didn’t worry about the car but instead just smirked the same way every typecast 40-something guy does in a high-end car commercial.

I was back into the city in about an hour. Right on time, but a little muddy. Turns out there had been no need to worry so much being on time or keeping plans in tact. Everything had gone exactly as planned. Even though those plans weren’t entirely my own.

**Turns out the Eagle Creek trail was closed anyway. It has been closed since some kids with fireworks caused a wildfire up there in September 2013. My wife, dog and myself almost took that trail the day the fires occurred during our first trip to Oregon. We skipped it to make up for lost time, and ended up skipping out on being one of the stranded hikers who had to wait out the fire to be rescued.